I have a few rules about conversations, and those rules cause more than a few people problems. Almost exclusively those people are attempting to discuss politics. Otherwise, it's religion. It's invariably something social.

1. I don't discuss things about people, whatever my opinion of them, with other people who wallow in hate, regardless of their rationale for having that hate. That's not having a conversation. It's misery wanting company, and that's not my bag, man. (Note: Getting peeves/concerns of your chest is one thing, and it's not what I'm talking about. We all have emotions. I mean hate, derision, hostile dismissiveness, and the like.)

2. If you say things privately that you deride others for saying publicly, then you may have more to work on than you think they do. I likely won't call you out on it or tell anyone else about it, but it will certainly have an effect on our future conversations.

I never cease to be amazed and saddened at how so many rationalize their intolerance of and animosity against others. The real kick in the pants is how almost everyone talks about how much better a place they want to make the world... if only those other people would drop dead, be exiled, ostracized, lobotomized, forcibly re-educated, or otherwise be made to suffer for not being 'correct'. (I kid you not. Those are a few actual examples of things people I know on Facebook, Twitter, Myspace, LJ, and IRL have suggested in the past and lately as courses of action for the problem of others' different beliefs/opinions.)

Angry may be adrenalin, but it's not a life. There is a big difference between the two, if you ask me. 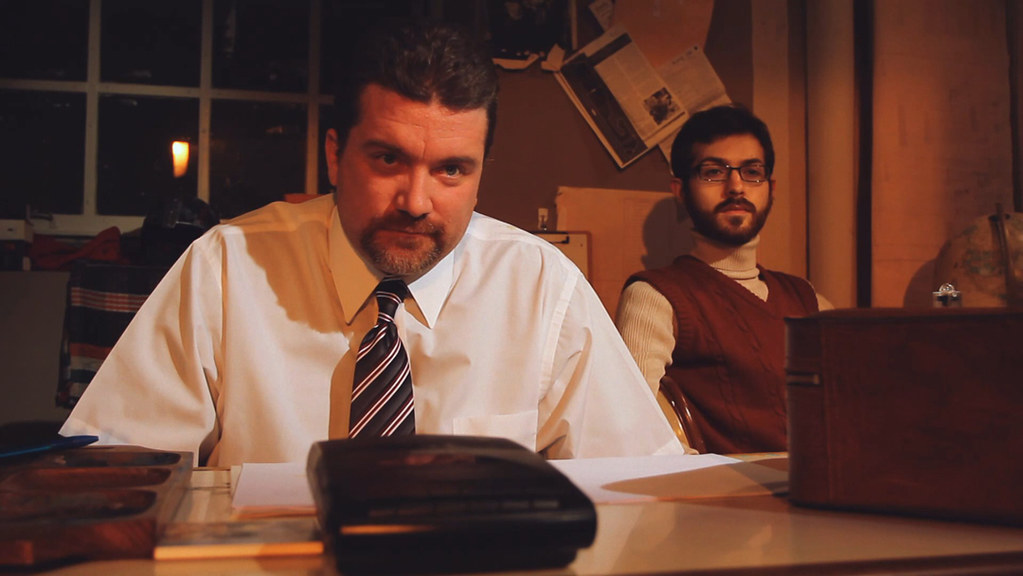 This is a still from the short film "Twenty-One Questions" (Strawhouse Pictures, 2012). That's me in the foreground looking perturbed. We filmed it in a basement office of an old U.S. Post Office over the course of two eight-hour days on an October weekend last year. The film recently won the Audience Favorite Award and the Best Film Award recently at the 2012 Underexposed Film Festival, and the producers are working to get the film entered into more film festivals next year.

I am quite pleased.

I'd a nice long post written, but then a mystery keystroke reloaded the page. And then the post was gone.

This has happened too often lately. Maybe LJ is trying to send me a message.

I'm not going into it today or probably even tomorrow. Time to digest and mull is required.

Some years ago I was engaged in questioning and fact-finding about a series of highly unusual budget matters and administrative actions at my alma mater. This was back when I gave a damn about the place. The university president had hired a professional lobbyist, last name Trawick, to camp down in the state capitol to make deals for the college and also to act as a shield against criticism and questioning on campus and in town. I'd managed to land an appointment after much asking and a lot of random dropping by her office unannounced.

She dodged my questions initially, deflecting them to the usual "for the good of the school" and "these are new times requiring new ways of doing things" and so forth. No answers, of course. Nothing to pin down. No information. Like a bother, I kept asking her to just answer my questions, the few there were. I wasn't asking for trademark or patent secrets, for goodness sake. I was asking about budget allocations at a public college, a matter of public record kept mysteriously non-public. Of course the inquiry became a debate, at her preference, wherein the subject was whether or not it was my business not only to know but even to inquire as to anything going on at the institution. After a few minutes and her getting nowhere, she finally piped up with: "Who do think you are to be questioning anything Dr. DiGiorgio does here?" My response was: "I know exactly who I am and why I'm here, and that's what's bothering you, isn't it, my nerve to ask and my lack of insecurity?" She then informed me I had no right to ask or too question what the college president did. I countered that as a public employee at a public, hugely state-supported college operating much at the pleasure of the legislature and therefore under its laws and regulating the obligation was up to them to answer.

Then she kicked me out of her office.

I had a microcassette recorder switched on in my jacket pocket during the whole thing. I played the tape for the editors at the college newspaper. I gave the tape to a reporter, a girl named Shannon, who was doing a story on the budget mysteries. I never saw the tape again. A few days later, Shannon quit the newspaper and quickly left the college altogether. Not long after that the newspaper was quietly shut down (again) and restaffed with people who did everything good journalists do, except ask questions.

A few years later Dr. DiGiorgio's administration of the school was put under public scrutiny, all the way up to the Chronicle of Higher Education. He received a vote of No Confidence from the faculty congress, and the school was subject to a legislative audit. At the time, he was the only college or university president in state history to survive a No Confidence vote, though the legislative audit and an independent one commissioned by himself did not come out so well for him. He kept his job, but barely. It figures, though. Dr. DiGiorgio's other career, years ago, was as a licensed psychotherapist. He's good with people, politicians in particular.

This story is one of the reasons I distrust authority.

The very idea that "nobody could have foreseen" the recent U.S. economic collapse is galling. I did, and I said so back in 1998. I had worked in the mortgage business, albeit unsuccessfully, in the mid '90s. It was at the time when sub-prime mortgages were a laughing stock, openly dismissed and ridiculed by serious financial professionals and analysts alike. They were seen as a gimmick, and they were right to be seen so. The only people selling sub-primes before '98 were at best hucksters, mostly selling them to people with some land who were buying single-wide and double-wide trailers. Or to the working poor. And easily half of sub-primes defaulted. I remember. I worked collections for the lenders, too. And the came Bill Clinton and Andrew Cuomo.

President Clinton and Housing Secretary Cuomo unveiled a new initiative to promote home ownership. I remember the press conference well. The long and the short of it was that banks were now not only going to be encouraged but mandated to make loans to people to whom they otherwise wouldn't give a loan application. It was okay, though. The government was going to back them up. There'd be some defaults, said Cuomo, but it wouldn't be many at all. I looked at my (now ex-)wife and said, "This is going to end badly." The government and its financial gurus - Paul Krugman included - were defying centuries of banking and finance experience, insight, and knowledge. They were specifically defying the notion that if people really don't have the money coming in, then they can't spend it. Within a year I was seeing more and more big national and international banks not only originating and servicing sub-prime loans. Not only that, they were including them in investment securities and other financial instruments - in order to spread the risk, and such instruments wound up in pension and 401(k) funds. It was all doomed to come crashing down, and then the U.S. federal government was going to be on the hook for it. But it was still going to cost everyone, and I mean everyone, billions and trillions of dollars. There was no avoiding it, at least not for long.

It's like government spending. It's not really government spending. It's taxpayer spending but with other people spending the taxpayers' monies, and so many people seem to think it's different. For every single government program, taxpayers foot the bill. The more politicians promise and the more the taxpayers demand from them, either the more taxes increase immediately or the more debt is accumulated by the government to pay for things. But the credit bill still comes due, and who pays? Taxpayers. And then they complain about the taxes. And then blame the politicians. But they don't want to give up what they get from the government, the stuff they're complaining about paying for. They want other people to do without or to pay more.

You can't live in credit forever. Nobody can. You either live within your means as you go, or you get forced to live below the means you used to have because the economy has collapsed since you couldn't exercise some fucking restraint.

I'm a nobody, and I knew this shit was coming. All of it. Almost a decade before it started happening. I'm not a genius, nor am I an oracle. I'm just not an idiot. And yes, I'm talking to you Bill Clinton, Andrew Cuomo, Alan Greenspan, Timothy Geithner, Ben Bernanke, and all.

Unlike some,
I don't want to change the world. Truth be told, I believe that'd be colossally selfish, egotistical of me. Seriously, who am I to prescribe to everyone else how to live? Who is anyone else to do so, for that matter? My agenda is just to encourage and engage in the discussion of ideas, however small my market, and my market is people I may meet in person and people who read my writings. It's a microscopic market, yes, but them's the breaks. I'm not big for the faceless crowds. The genuinely interpersonal is more my thing. Also, I have no desire whatsoever for power, other than the power to speed up bureaucracies and make them efficient. (I know that power doesn't exist, though, and so it's a moot point.)

"If you have always believed that everyone should play by the same rules and be judged by the same standards, that would have gotten you labeled a radical 60 years ago, a liberal 30 years ago, and a racist today."